Click below to see if Aakhri Adaalat ((1988)) is available to rent, buy, or watch with Amazon Prime

An intrepid police inspector forced into a desk job must take matters into his own hands when ruthless criminals are released on a technicality. 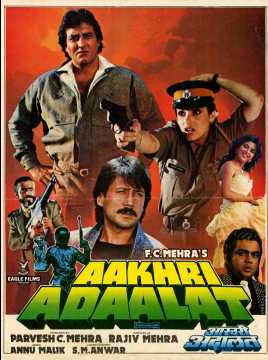 Trivia Sonam bashed Rajiv Mehra in the media after the film released. She stated Mehra slashed her role to a mere 15 minutes. This angered her as she was promised they would present her well in the film. She was so happy with her work that she requested to Yash Chopra that he release his film after Aakhri Adalat. Soundtracks Solah Khatam Satra Shuroo Performed by Alisha Chinai Written by Sameer Composed by Anu Malik